We are proud to have been recognised by both our peers and fellow business leaders, awards to date include:

Awarded 'Small Animal Hospital' status by the Royal College of Veterinary Surgeons in January 2018. The highest standard attainable for surgeries such as ours and shows that we have been performing to the highest standards of veterinary care.

Awarded 2nd place in the Best UK Vet awards, beating all other UK practices (except one). February 2018. 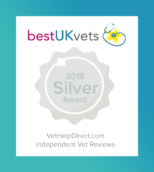 Winner of "Best Growth Story" in the East of England 2015 awarded by the governments "Business is Great" campaign team.

Awarded 2016 membership to the "Future 50" group of companies in East Anglia who support and nurture the top 50 new and exciting ventures in our region.

...and supported financially and with love by the 'New Anglia Growing Business' partnership since 2014.